"We are the Power of Change"

Ali has a job, that could put his life in danger: He helps young women entering the work force in private sector business in Firoz Koh, the capital of the province Ghor in Northwestern Afghanistan. That friends and colleagues laugh at him because he supports women, doesn't impress him. But what really worries him, is what will happen when religious extremists find out what he is doing. So far, he keeps a low profile and just goes on. Society, he says, can’t move on if half of its population is literally kept in the dark. 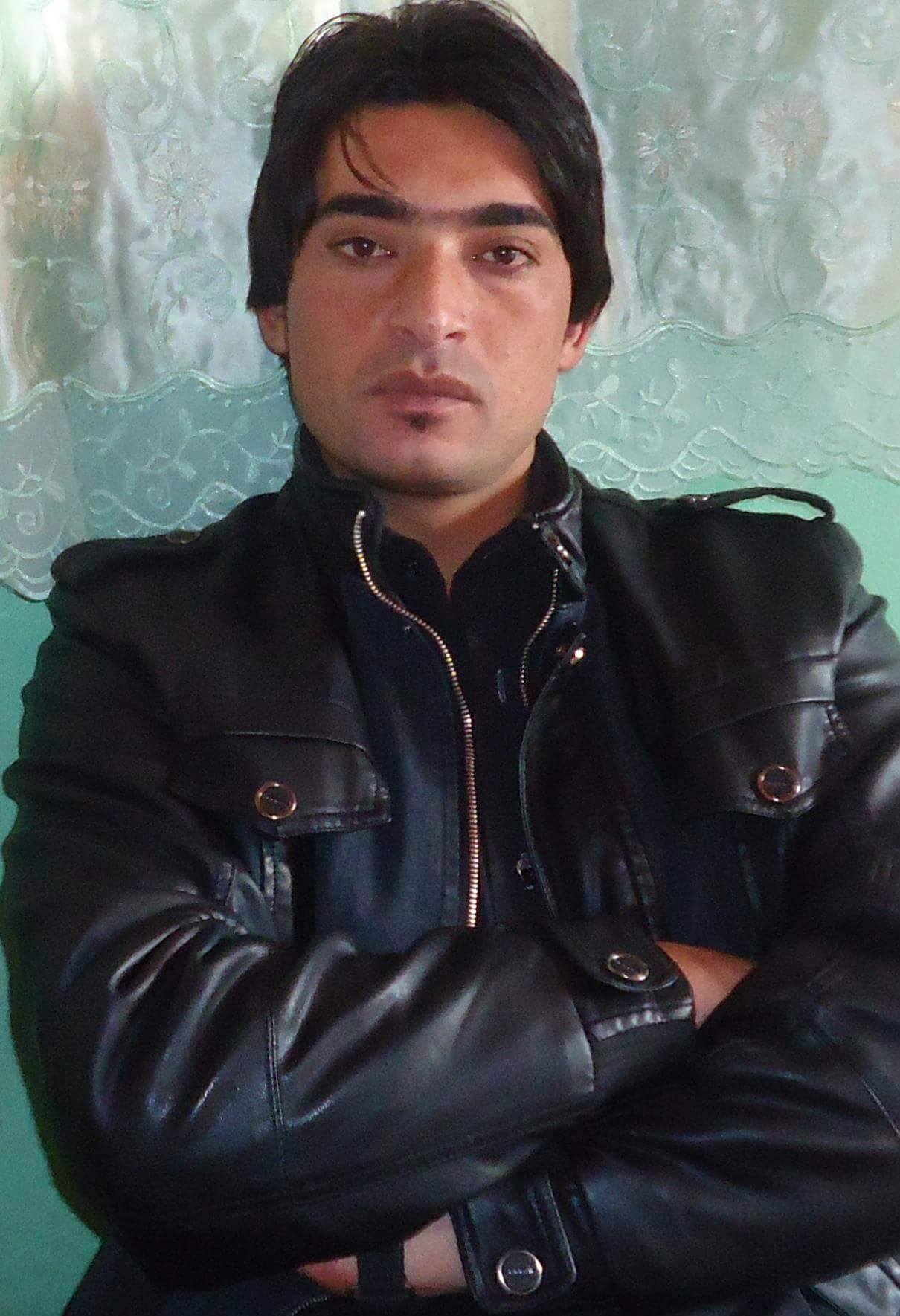 Ali and I met three years ago at the airport of Kabul. I was waiting for the plane to Bamyan, the flight was delayed and there was nothing else to do than to fall asleep sitting on the suitcase or to start chatting with the person next to me, which was a tall guy with thick black hair, wearing jeans and a black leather jacket, speaking an impeccable English. Ali had just been to Kabul for a meeting and was on his way home to Firoz Koh, the capital of Ghor, a province in the Northwest of Afghanistan. We ping-ponged questions for about an hour. He told me that he coordinated literacy courses with the Afghan National Police, that he is married, his wife being a a project officer for an international NGO, that they have a son, who was about one year old, and that he feels it's also his responsibility as a father to take care of his child and help his wife. I was surprised when I got to know that Ali at that time only was 21, he looked much older. He grinned, when I told him. “Afghan people always looked older than they actually are”, he explained. “Their faces mirror the hardships of the country.”

When we departed Ali wrote his email in my notebook. Since then we have been in touch.

In our chats we talked about our lives, about work and family, but also about human- and especially women’s rights. I was impressed by Ali’s strong stand against fundamental and patriarchal traditions in his society that limit women’s lives and by his outspokenness against gender based violence.

With a population of over 700’000 Ghor is one of the poorest provinces of Afghanistan. The influence of the central government is meagre, which has emboldened warlords and given new rise to the Taliban. Moreover, due to the almost total absence of rule of law Ghor is considered “the country’s capital of gender based violence and abuse” (“The New York Times”), a statement Ali confirms: Even though women have started to go out and work in the communities, in many places they are still deprived of their basic rights. In some districts child marriages are common and women can’t leave the house without the consent of a male guardian. Too many women, he says, are still illiterate and denied education, too many are victims of honour killings, and it happens again and again that a young woman is captured by extremists and stoned to death, because she might have been in love with a man who wasn't her husband. The perpetrators, however, never face justice. 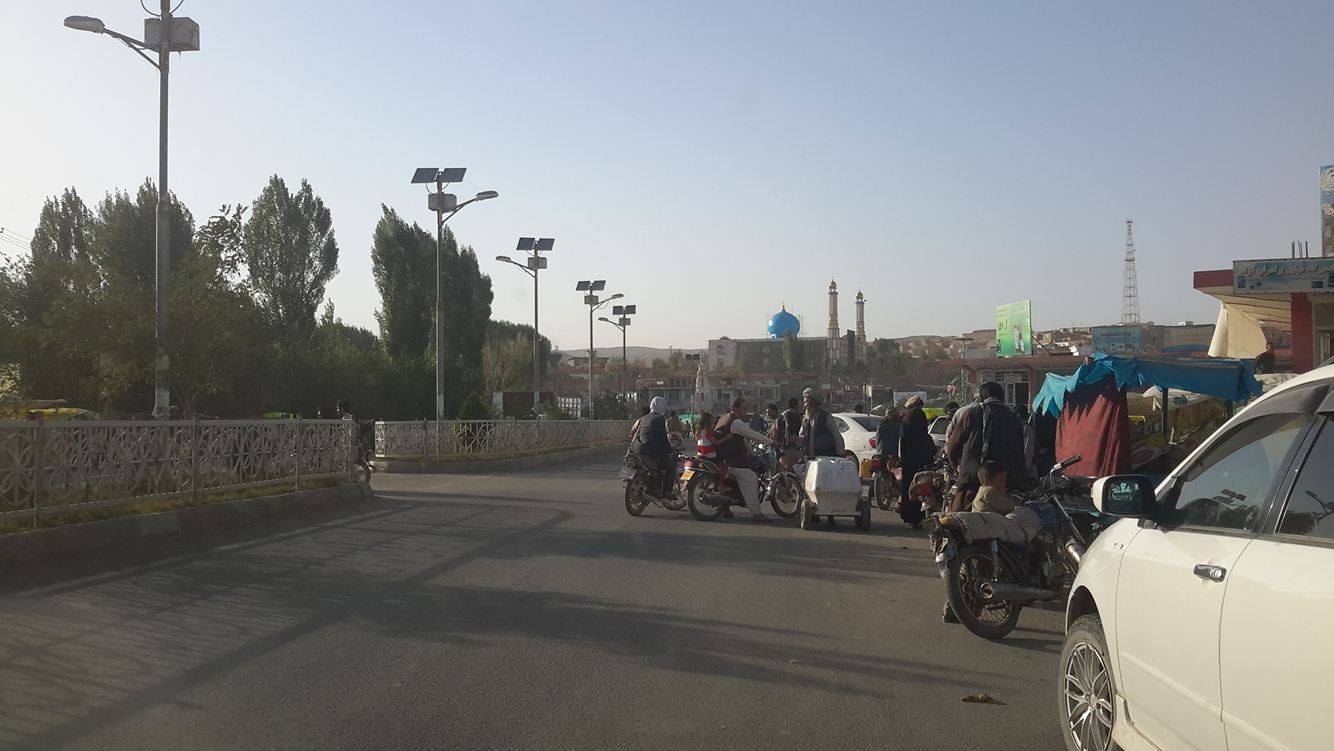 Street scene in Firoz Koh, the capital of Ghor 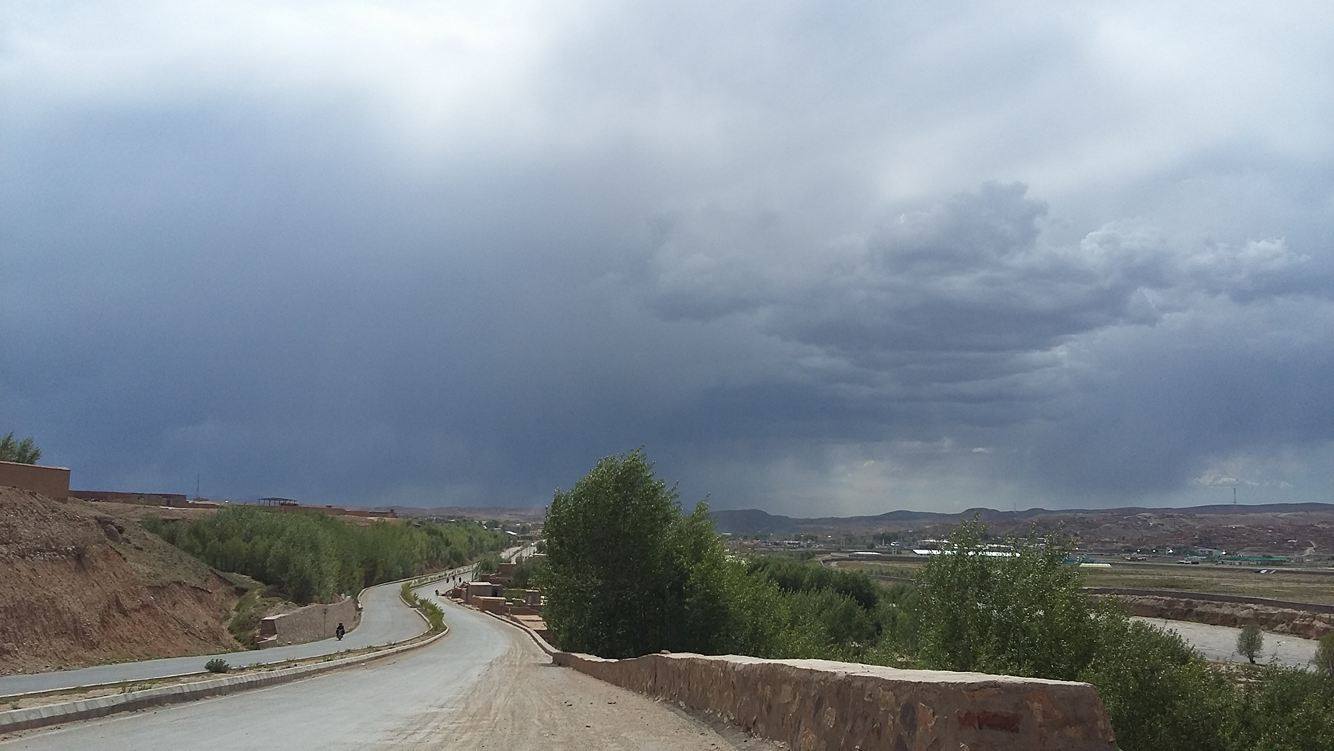 A long and winding road in Firoz Koh

One day Ali messaged me that he was applying for a new job and asked me to keep my fingers crossed. He was very happy when he got it and almost immediately took off in his new position as a provincial intern- and apprenticeship coordinator in a project called WIE, women in economy, a project that is funded by international organisations.
The project, he tells me, is designed for women between 18 and 30, who have graduated from high school, universities or technical institutes in the province of Ghor, but don’t have any work experience in private sector businesses. His job is to assess and enroll interested young women for a six-months-internship in national and international NGOs as well as in civil society organisations where they start getting practical training in the fields of administration, finance, logistics, transport or communication. This aims at improving their chances to later find a job in private sector businesses.

Ali tells me that he applied for exactly this job because he feels it’s the duty of the young generation of men to support the women in their province and challenge patriarchal structures. “Men can be the power of change”, he says. “Society can’t improve if the lives of women don’t improve. And I want my society to move forward."

Ali's words hit a core issue: It’s a well known fact that there is hardly any chance for social and political development as well as for economic growth if half of a society’s population is discriminated against, doesn’t have access to education, health care, employment and economic opportunities, if it’s literally kept in the dark. Thus - when ever and where ever I discuss gender issues I keep repeating, that these so called “women’s issues” aren’t merely women’s issues. They are societal issues. They are issues that determine the well-being of the whole society and as such concern women as well as men. To get the gender issues out of the “women’s box”, however, is a big challenge and it's an even bigger challenge to get the men on board. There is still a long way to go. But now I have a companion in Afghanistan. 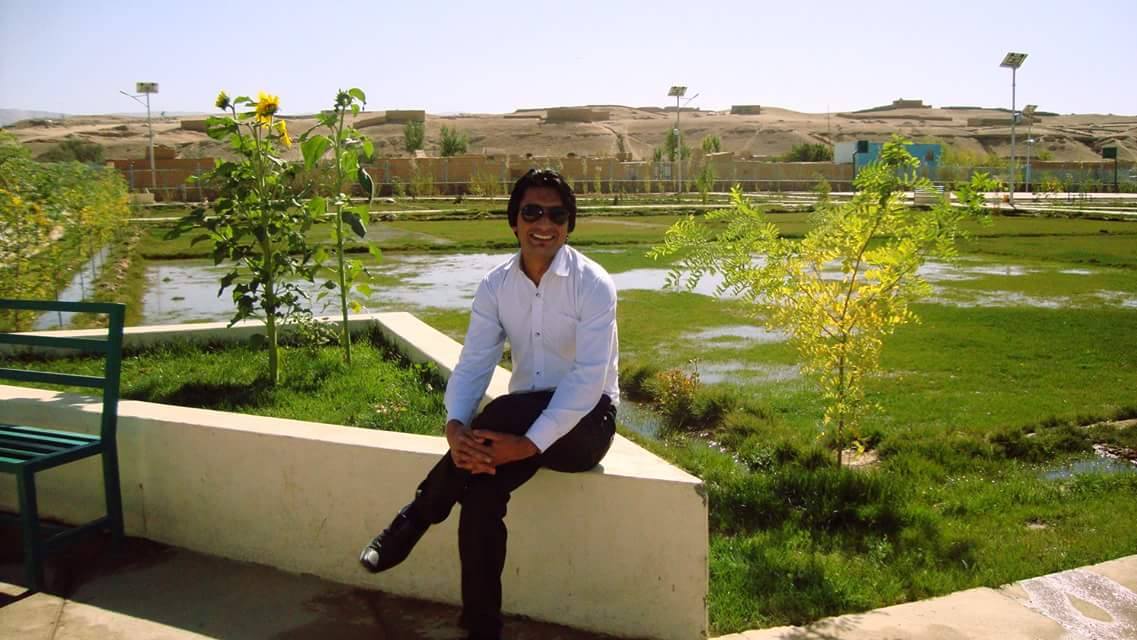 To promote the "women in economy"-project Ali visits girls’ schools and universities in Ghor, he talks about it at the department of women’s affairs and at places where women gather, cafés, for example. The project generates a lot of interest. Many women have dropped by his office to get more information or to apply for an internship. Most of them come with their parents to make them understand what their daughters are up and to get their approval. Since Ali started to work on the project 150 applicants have been successfully enrolled. So far 15 young women have found a permanent job in private health clinics, hospitals, in social and cultutal associations as well as in local and international NGOs. It's not a lot yet, but it's a good start. "I will try my best to get more girls employed", Ali says. Job opportunities are rare in Ghor but the government tries to create new openings by means of national programmes and projects. So the chances are there.

Not everybody is thrilled about the project, though. Ali’s friends and male colleagues laugh at him because he supports women to get into the work force. They say that this would ruin his future. But he doesn’t care about those comments. Sometimes he talks to his opponents and explains why he believes his work is necessary. And meanwhile he feels that there is an increasing number of young men following his path. Ali also meets with conservative and religious people in his community who disapprove of his work and tells them why he is convinced their communities will benefit from it. One of the best arguments, of course, centres around money: If young women earn an income they not only get economically empowered, which often enhances their decision-making position, but can contribute to the income of the entire family.

No, mocking friends and frowning conservatives don’t bother him. No really, at least. What worries him, however, is what will happen when the Taliban find out what he is doing. The Taliban are a challenge. They claim - as religious extremists love to do - that women in the work force are a blow against Islamic principles and a danger to the social fabric of the communities. Anybody who acts against that risks his or her life. Thus Ali keeps a low profile, never shares anything about his work on Facebook. The Taliban have had him on their radar in the past and they still might keep an eye on him. Ali admits that he is scared. But to be scared, he says, is common in his province. 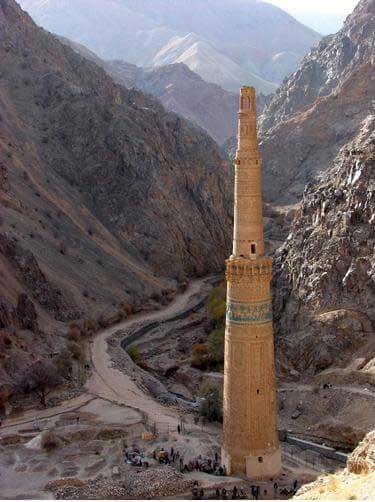 The Jam Minarett in Ghor. It's 65 meters high and the second tallest brick minarett of the world. Since 2002 it's o the list of the UNESCO world hertiage sites and also on the list of world heritage in danger

When I asked him, why he has become so passionate about what he is doing, and more so, why he has become the man he is, he tells me that his mother, even though she was illiterate, always wanted her three daughters and six sons to get educated and the chance to work. And fortunately, she was backed by her husband. “My father”, Ali says, “has supported us even when the conditions were very tough and worked to pave the way for all of us kids to study and improve our lives.”

His mother is admired and viewed as a very successful mum

He has seen how education and the ability to work has made his own family prosper: They have a house, have been able to buy land, have access to health care – and they have a good reputation in the community. And on top of all that Ali’s mother is admired and viewed as a very successful mum. What is possible on the microlevel of his family, he concludes, must be possible for the larger society as well. 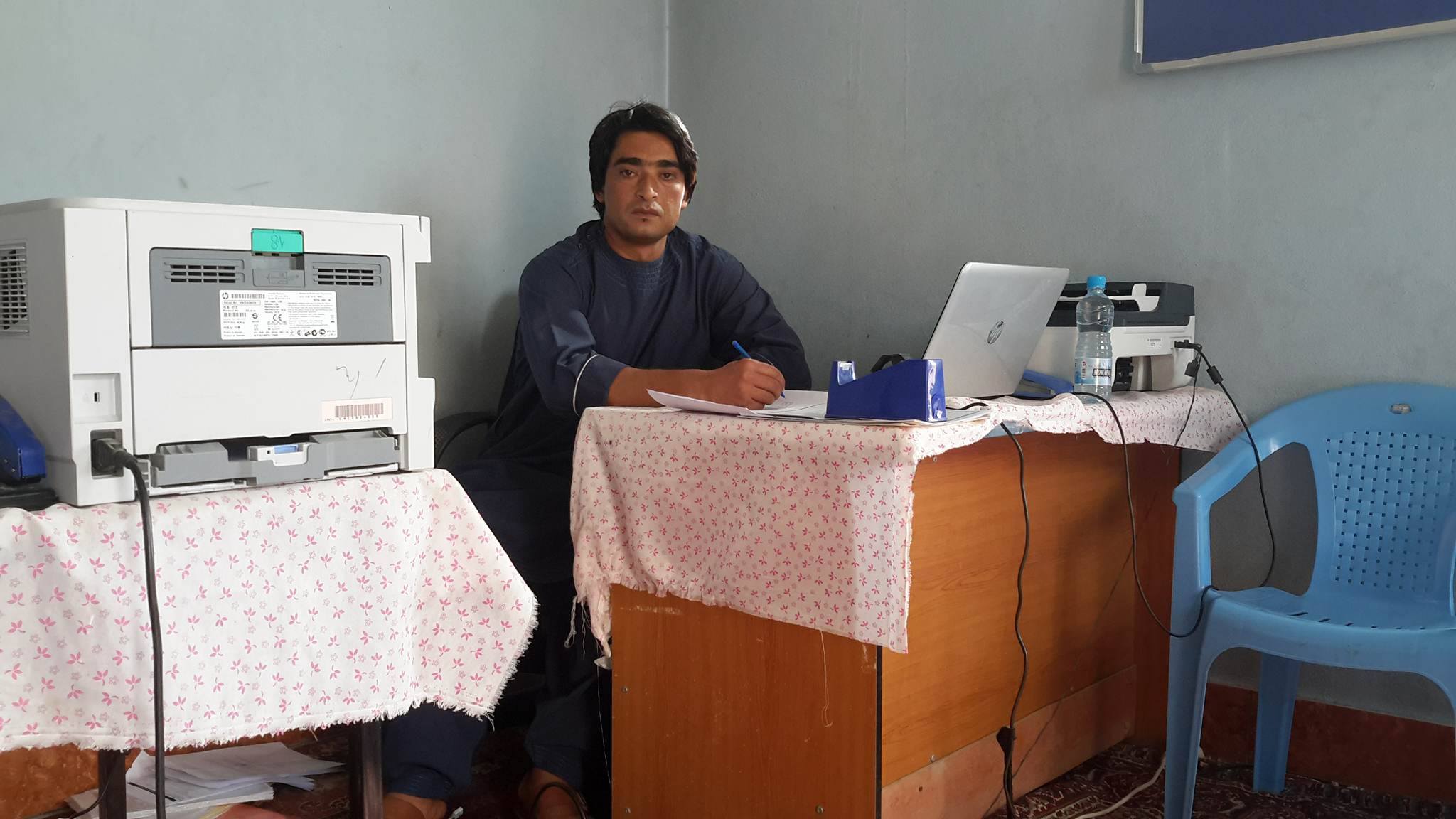 Alii in his office

I hope with all my heart that Ali will be able to continue his work. But I am worried. Again and again he messages me that life in Afghanistan is getting worse day by day. During the spring season the Taliban attacks increased all over the country targeting those, most of them locals, who work for the government and international NGOs. “The people hate the Taliban”, Ali says, “the locals are the main targets of the war. But ironically enough that doesn’t change anything. The Taliban are supported by Pakistan, Russia, Iran and even by some groups from the Afghan opposition. They all seem to comfortably live with the fact that with their powerplay they sacrifice the Afghan people.”

"We all wish to have a bright future in our country"

Apart from the Taliban attacks Ghor faces a worsening number of religious extremists, who in the name of Islam strive to get women’s issues off the agenda and fight women who dare to go to work. There are days on which Ali doesn’t go to his office because the security in the city isn’t good. “Sometimes I really get tired of all those problems and then I long to leave Afghanistan with my family”, he writes. “We all wish to have a bright future in our country and to live in peace and security. Why can’t this be possible?”

But so far he has stayed. And just goes on. 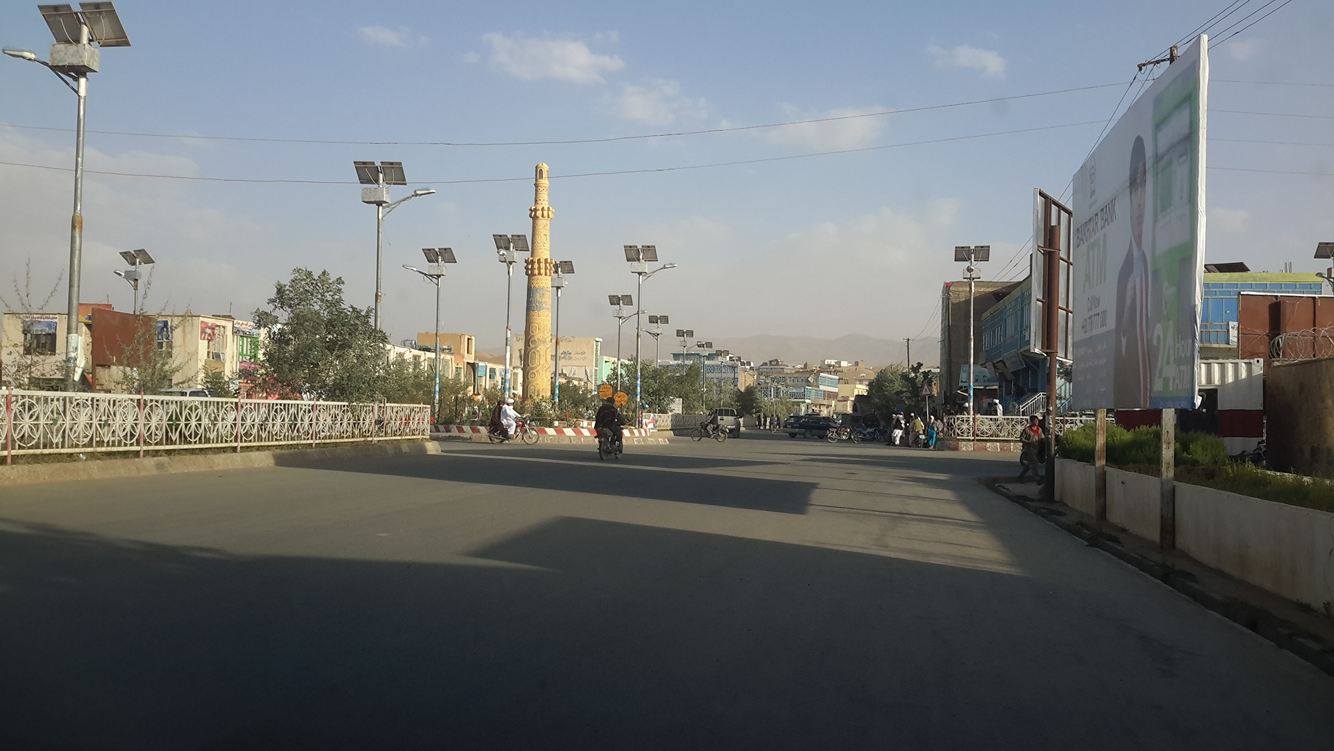 *The protagonist's name has been changed. He fully agrees though to the publication of this article and sent me a collection of pictures to be shown with the text. He wants people to know about life in Afghanistan.